We, members of the statewide and national Save Our Seniors Network, are outraged at your October 7, 2021, veto of Assembly Bill 279. AB 279 was straightforward urgency legislation to protect seniors. It received an overwhelming, bipartisan 91 AYES to 10 NOES (95%) cumulative vote in the legislature, and was determined by both the Assembly and Senate Committees on Appropriations to have negligible fiscal impact.

This bill was designed to prevent involuntary, medically non-necessary transfers of residents from an Intermediate Care Facility (ICF) or a skilled nursing facility (SNF), and to halt significant reductions in services thereat, during the COVID-19 state of emergency.

Authored by Assemblymembers Al Muratsuchi (D-Torrance) and Miguel Santiago (D-Los Angeles), AB 279 would have applied to residents at ICF’s and SNF’s statewide. But the bill was rooted in the fight to halt Pacifica Companies (Pacifica) – a for-profit, multinational real estate development corporation – whose objective was to evict Japanese American seniors from the Sakura ICF (an iconic community resource located two miles from the historic Little Tokyo district), and convert the conservatively estimated $24M property into highly lucrative, market-rate apartments.

As you should know, Pacifica succeeded in forcing out the ICF seniors by August. This was in no small part due to the machinations of the California Department of Public Health (CDPH) under your administration. Was the CDPH susceptible to the agenda of the nursing industry lobby, the California Association of Health Facilities (CAHF), representing Pacifica’s interests? We believe so.

It is curious that CAHF launched its campaign against AB 279 in the Assembly, but then soon dropped their opposition when CDPH introduced its opposition at the Senate Committee on Health hearing. Did CDPH facilitate CAHF’s exit in a contrived effort to “depoliticize” CAHF’s opposition to AB 279, to provide cover by the very state agency charged with the duty “to advance the health and well-being of California’s diverse people and communities”? We believe so.

It was at that hearing that CDPH first raised the spurious “unintended consequences” falsehood (which you later duplicated, near-verbatim, in your veto message). Then, at the Senate Appropriations hearing, CDPH fabricated a cost estimate for the bill in the tune of $4.2M, based on improbable impact to struggling ICF or SNF ownership; CDPH provided no evidence to support this claim. To reiterate, the Appropriations Committee analysis for both houses of the legislature determined negligible fiscal impact, and saw fit to ignore CDPH’s strawman argument.

In thus aligning itself with CAHF’s and Pacifica’s for-profit agenda, CDPH became the central player to kill AB 279 (as was foreshadowed by their earlier approval of Pacifica’s plan to evict the Sakura ICF residents). CDPH’s lobbying effected strategic delays against AB 279, buying time for Pacifica to close the ICF doors before the bill could have become law. These delays also pushed the legislative timeline for AB 279 past the legislative Summer Recess, providing you the opportunity to delay your decision long enough to preclude any chance for legislative override. Why else would you sit on this urgency-measure bill for 35 days, and veto it only three days before the October 10 deadline?

Ever since the controversial sale of the former, nonprofit Keiro facilities to Pacifica in 2016, many in the Japanese American community understood that Pacifica had no regard for our elders, our community or the legacy of this Japanese American-made institution; that Pacifica would not see the medical necessity of bilingual-bicultural senior care; and that Pacifica’s agenda was to accelerate gentrification of the historic Boyle Heights community where the Sakura ICF is located. It was therefore no surprise Pacifica did not wait for the state of emergency to end, before commencing their evictions. Pacifica thereby compounded the seniors’ vulnerability to transfer trauma, by forcing their families to move them from the (100% COVID-free) ICF to less-safe facilities, sight unseen due to restrictive COVID-19 visitation rules.

The scenario is foreboding. A state health agency that dubiously lobbies for a multinational corporation which “flips” senior care facilities for profit – then circumvents overwhelming bipartisan legislative support for seniors’ need for stability and continuity of care – does not serve the interests of California seniors, but instead the for-profit interests of the dominant nursing care industry. Your veto sanctioned these exploits.

We declare by this letter that your veto does not go unanswered. We join in the mounting rebukes of a CDPH that has failed to halt the corporate violence upon our seniors. In fact, it was at the outset of the pandemic that your CDPH – with its order to SNFs to accept coronavirus patients – paved the way for the onslaughts against our elders. In this context, Pacifica reaped yet more profits at the cost of the lives of 128 seniors who resided at the other two former Keiro facilities included in the 2016 sale to Pacifica. The vast majority of these avoidable deaths occurred at Pacifica’s Kei-Ai Los Angeles, the SNF which the Los Angeles Times dubbed the deadliest nursing facility in California.

Indeed, we recognize that the corporate healthcare industry is determined to obstruct single-payer healthcare-for-all, including integrated bilingual care and bicultural services. The Japanese American community has long recognized how healthcare inequality and racism are historically embedded within for-profit healthcare. It is precisely this recognition which led to the founding of Keiro as a nonprofit nearly 50 years ago. And why Japanese Americans had invested (per Keiro’s 2017 IRS-990) more than $80M in community donations, into Keiro’s culturally-sensitive eldercare facilities, to serve our present and future generations. This is the historical context of our outrage.

For all these reasons, your veto message on AB 279 was contemptible. It was a literal cut-and-paste job of CDPH’s specious “unintended consequences” argument. How was it that the legislature (again, 95% Aye votes to 5% Noes for AB 279) saw through CDPH’s fabrications and deceptions, but you did not? How was it that CDPH exerted such a definitive influence on your decision? And where the dire consequences were to our seniors, not to the multinational Pacifica whose actions were anything but unintended.

We also question your rationale that CDPH “does not have the legal authority to compel a facility to continue operating or providing services if the facility wishes to close.” This flies in the face of last year’s state-takeover of two Pasadena, CA, nursing homes, where imminent danger to its residents was cited as justification for keeping both facilities open.

Public support for AB 279 represented a growing sentiment for senior care reform. Organizational support outnumbered CDPH more than 46 to 1. Over 2000 letters in support of AB 279 were delivered to legislators from districts across the state. Streams of letters and calls for the bill were directed to your office. Let it be known, then, that public awareness of highly questionable conduct – both in the ranks of CDPH leadership and within your office regarding AB 279 – will not soon be forgotten.

We thus stand resolute, and hold to the Japanese concept of shichiten-hakki! (Paraphrased: “Even if many, do not be discouraged by disappointments.”) We will continue to fight for government and corporate accountability and for healthcare equality; and in memory of the 128 lives lost due to the greed of Pacifica and the suspect intentions of a sitting governor. 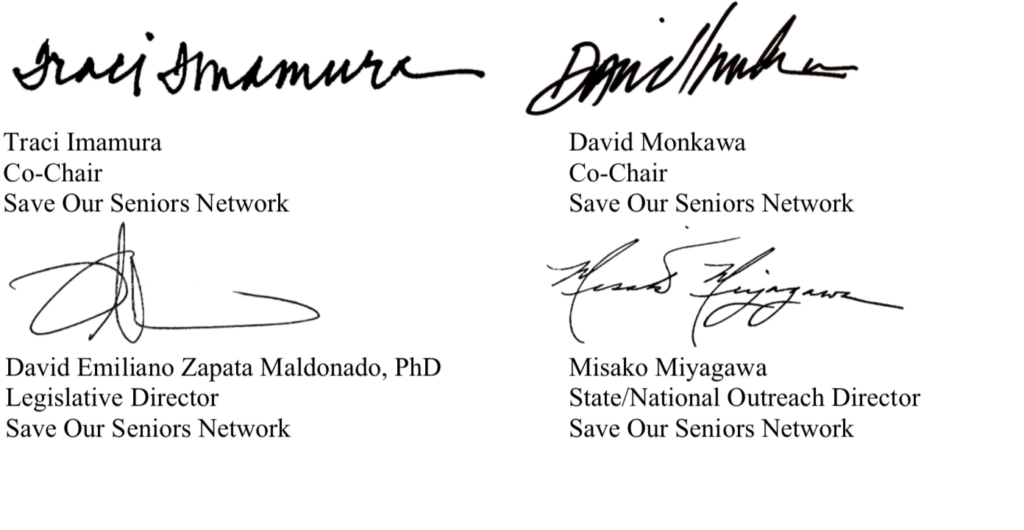