A major chapter in the history of elderly care for Japanese and Japanese Americans has passed with the emptying out of the Sakura Intermediate Care Facility (ICF).

Following the sale of the former Keiro Nursing and Retirement homes to International Real Estate Developer Pacifica Companies, the original “Conditions of Sale” expired in Feb 2021, and after Save Our Seniors Network (SOS) held its first action on Jan. 26, 2021, Pacifica responded and announced on January 28: “None of the current residents of the ICF will be evicted…Pacifica understands that the ICF staff have been an extension of our family for residents … and remains committed to maintaining staff that contribute so much to resident care.” Keiro published their statement praising Pacifica and endorsing the eviction of residents a few days later. Keiro has about $90 million they received from the sales combined with past donations but so far have not provided one penny for “residential healthcare”.

Since March 1st, Pacifica has committed no less than 5 violations of the law in order to speed up kicking out the seniors.

They received a citation for not providing proper assessments of residents before evicting them, for which the penalty was an extension of the 60-day eviction notice. Pacifica was then cited for failures in the water system which prevented some from bathing and for inadequate food nutrition in July. As the eviction date got closer, Pacifica was cited for laying off 20% of its staff from the ICF, without notice. One person had 30 years of dedication and received no severance or bonus. And, most recently, Pacifica was cited again for illegal and untrue threats made to residents, in which they stated, “after the final day August 23rd, there will be no staff around to care for your loved ones.”

David Monkawa of SOS, says, “All of these citations have not been able to stop Pacifica because the laws have little enforcement mechanism. There are no healthcare cops, and major penalties are rarely enforced. Nursing home industry lobbyists have free access to Department of Public Health leaders providing suggestions and ideas according to the Sacramento Bee.”

Over the past months, the Sakura ICF Family Council and Save Our Seniors Network have consistently pressed for a back-up plan for as many Medi-Cal residents as possible to be able to go into the Sakura Assisted Living Facility, which is located on the same campus as the ICF. “They wanted to clear out the residents so that even if AB 279 passed, they could tear down the ICF and build apartments. But if AB 279 passes the CA senate floor vote on Monday August 16, Pacifica will again no longer be able to make changes in services and conditions to Sakura ICF, Sakura Retirement Home, Kei-Ai LA and Kei-Ai South Bay. We will enter a whole new world where the new Attorney General, Rob Bonta will have lots of input over how AB 279 will be interpreted,” said David Emiliano Zapata Maldonado of SOS.

The Sakura ICF Family Council has plans to expand to include all those who have been evicted. SOS will be monitoring the treatment of Sakura Garden Assisted Living Facilities (SGALF) with respect to their rights and the welfare of 200 other Japanese and Japanese American residents covered by the “Conditions of Sale”. With the passage of AB 279 into law, constraints upon operators of licensed senior care facilities to not evict seniors from those facilities and not reduce or alter existing services, including bilingual and bicultural services, will apply to all senior nursing facilities and ICFs statewide.

“Unfortunately, residents at Sakura ICF have now been all relocated to other, mostly non-bilingual, non-bicultural facilities, thus destroying a once-thriving Japanese American seniors community. But, we will continue to work to gain secure accommodations and services for the transferees to the Sakura Gardens Assisted Living Facility and demand answers for the horrific death rates at Pacifica’s Kei-Ai facilities,” stated Dr. Kensaku Nakayama, whose mother was a resident at Sakura ICF. 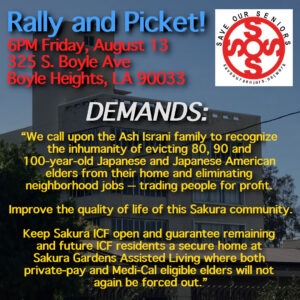 The above press release in PDF format is here:  https://app.box.com/s/gigt20ke6llcmm5r81u93j2xy91zgcje